I woke up Friday morning at 1:00 am, and couldn’t fall back asleep. My alarm was set for 2:40 and I was pretty upset with myself. I don’t know if I was just afraid I wasn’t going to wake up when my alarm did go off, but I just wasn’t tired anymore. Thursday evening I had parked my car underneath an outdoor light at my parents’ house and I left my windows cracked a little. This was a bad idea. My parents live on Lake Koshkonong, and the lake fly problem is horrendous, especially when it’s hot and humid. When I went out to my car Friday morning there were probably thousands of lake flies covering my car. Since I’m an idiot and left my windows open there were many inside my car as well. Some were alive, some were dead, all were annoying. On my one hour 10 minute drive to the airport I constantly had lake flies flying into my face. When I get back I’ll have to vacuum my car which by now is full of lake fly carcasses.

I parked in the Super Saver Lot and took the shuttle to the airport and was inside by 4:30 am. There was a little confusion as to what the x-ray screener was seeing in my suitcase. They had to pretty much look through my entire suitcase and it turned out that my computer charger and electric toothbrush charger were throwing them off. They probably were profiling me because of my ginger beard, because no sane person would let it grow as long as I have.

I connected in Atlanta, and got to Houston right on time at 11:30 am. I took the 88 bus up to the Chenevert stop, and walked to the Holiday Inn that I’m staying at. I don’t think they do much upkeep on the sidewalks on the route I took. I wound up crossing the street because I didn’t think my wheeled suitcase would have worked well, and I likely would’ve sprained my ankle. I was able to check in early again and I answered some emails and took an hour long nap before getting ready for the game. I got to Minute Maid Park at 5:45 but had to wait until six to get my ticket. Sometimes the Brewers’ provided tickets are available more than an hour before, and sometimes they’re not. An hour before the game is plenty of time, though, and I got inside at 6:05. I said hi to Tim Dillard as he ran in from shagging balls during batting practice, then went to get game photo number 83 taken. I decided on the Crawford Boxes as the backdrop and had a nearby fan with his own DSLR take the picture with my camera. After getting the picture taken I handed out a few cards to people nearby. Most everyone nearby sees the number when I’m getting the pictures taken, and I’ll tell them about what I’m doing and why. A girl that I gave one of the cards to tweeted at me a few minutes later asking if I could get a picture taken with her. I said yes and came back to see her. She told me she’s a senior in high school and does stuff with raising awareness for causes. She’s going to make a presentation about what I’m doing and let her classmates know that it’s important to join the registry. Thanks Alexandria!

I thought this was interesting; this was what the let field wall looked like when I was here in May. Specifically the two light tower supports and the CITGO sign. They added horizontal supports for those four pictures, and it looks like they might be adding more (which would hide the train even more). I guess I’ll find out what the end result is (hopefully), since the Brewers are back in Houston next month.

The game got off to a great start due to back-to-back home runs from Aoki and Braun in the top of the first. The Astros got one back in the bottom half of the first when Scott Moore hit a long home run to right field.

Sidebar time. Annie, a girl that I went to high school with, now lives in Houston (which I didn’t know before yesterday) and we met up in the 5th inning. We saw someone in front of us get some chicken nachos and even though I had already had a Nacho supreme earlier in the game I agreed that if Annie got some I would share. They were quite delicious but the raw jalepeños were a little much. I had slices with a few bites but it was too hot, even for me. Back to the game: It stayed a 2-1 ballgame until the sixth, when Rickie Weeks padded the lead with a 2-run home run. Here he is getting his traditional forearm from third base coach Ed Sedar.

In the top of the seventh the Brewers tacked on three more, with Gomez, Aoki and Ramirez getting the RBIs. Annie took off before the conclusion of the game because she had come with some friends. Before she left I had a neighboring Brewers fan take a picture of the two of us. Annie actually lives pretty close to the ballpark, and when the Brewers play the Astros in August I might be staying with her. Her roommate is going to be on vacation so I would have my own room. I haven’t booked a hotel or anything for that trip yet, so it should work out well.

Livan Hernandez pitched the 8th and the 9th and didn’t give up a run. Final Score: Brewers 7 – Astros 1. The final batter grounded out to Rickie Weeks, so Corey Hart had the final-out ball. He flipped it to Hernandez as Rickie and Ram-Ram hugged it out. In the fourth inning Chart had doubled, and I got a picture of him when José Altuve was nearby. Altuve is the Astros’ second baseman, and he’s having a great season. I took the picture because Corey Hart is about six foot six, and Altuve is listed as five foot five. Not too exciting, but I thought it was cool/interesting.

The Astros were lighting off fireworks after the game, and on my walk back to the hotel you could see them over the stadium from a distance. I’m glad they announced that the game was at 3:05 on Saturday because the original start time was 6:05, and that’s all I knew. Needless to say I would’ve felt extremely foolish if I somehow wouldn’t have found out and wound up missing most or all of a game while staying less than a mile from the stadium. Whew.

I’m not 100% positive that I missed a pitch, but I’m pretty sure I missed the 0-2 to Maldonado in the 8th. I was talking with Annie and I think I missed it. If I didn’t, so be it, I may have missed one earlier and didn’t even realize it.

Hey Ben, I live in Houston and I have been following you during the season. If you were wondering what the Astros were doing to the left field wall, my belief is that Jim Crane is making a lot of changes to the stadium for next year. Rumor has spread that he plans on getting rid of the train on the wall and the hill in centerfield. I am also curious is to how I can get a Brewers Italian Day shirt. Those look awesome 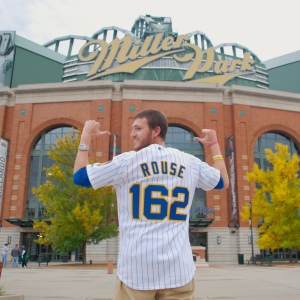